Elliot Sharp (b.1951 Cleveland, Ohio) is an experimental musician residing in New York for the last forty years. He has released dozens of recordings and composed scores for film in a range of styles including blues, jazz, noise, No Wave, and techo. His collaborators include Debbie Harry, Kronos String Quartet, Huber Sumlin and Pop Staples, and artists Christian Marclay and Pierre Huyghe. Sharp is the subject of a documentary “Doing The Don’t” directed by Bert Shapiro in 2008. He composed and performed the original work "Crowds and Power" in 1982 at The Kitchen. 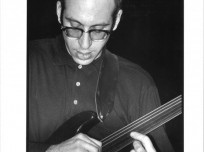