Ernest Gusella is visual artist mainly working with video who experiments by manipulating sounds and images. After he moved to New York City in 1969, he became friend with Woody and Steina Vasulka—the founders of The Kitchen—and Nam June Paik. In addition to his own projects, he has worked as a technician for video artists and musicians including Sara Horbacher, Doris Chase, Shigeko Kubota, and Nam June Paik. Gusella was included in the audio installation A Listening Room at The Kitchen in 1980. 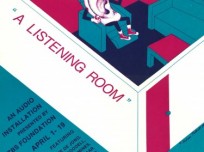