John Jesurun is a New York based playwright, director and designer. Much of Jesurun's work challenges and interrogates elements of architectural space, language and film, while exploring the relationship between form and content. Jesurun performed his work extensively at The Kitchen in the 1980s and 1990s, including his ongoing serial play Chang in the Void. In addition, his company has toured nationally and internationally, and has been produced and presented in numerous venues. For more information please see http://sites.google.com/site/johnjesurun/ 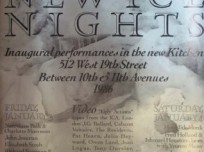