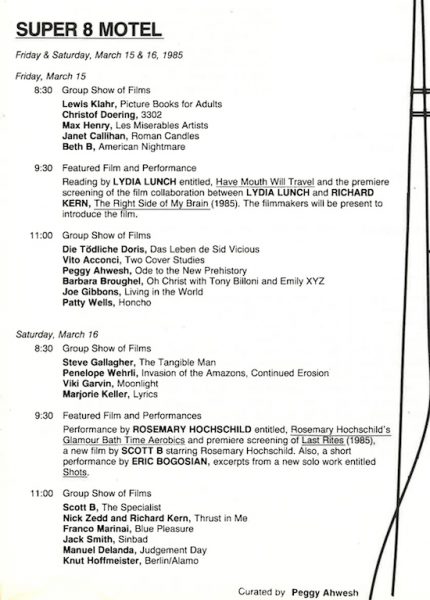 Across two evenings in spring 1985, a variety of short films curated by the experimental filmmaker Peggy Ahwesh were screened in The Kitchen’s Video Viewing Room as part of a festival titled Super 8 Motel. On the first evening, artist, writer, and performer Lydia Lunch gave a reading titled Have Mouth Will Travel. Lunch was also accompanied by the underground filmmaker Richard Kern to introduce the premiere of their film collaboration The Right Side of My Brain (1985). The twenty-three-minute film was directed by Kern and was narrated by and starred Lunch. It also featured music Lunch had composed. The film was an example of the Cinema of Transgression movement that was emerging in New York City at the time and which explored themes of violence, eroticism, perversion, and voyeurism. The second evening saw performances from the writer and actor Eric Bogosian (from his new solo work Shots) and from the actress and writer Rosemary Hochschild (in a performance titled Glamour Bath Time Aerobics), as well as the premiere of No Wave underground filmmaker Scott B’s latest film Last Rites (1985), in which Hochschild also starred.