Lydia Lunch is a singer, poet, writer, performer and artist based in Barcelona known for provocative and confrontational noise music. In 1977, James Chance and Lunch founded the short lived No Wave band Teenage Jesus and the Jerks which played dissonant, atonal rock music. Lunch is regarded as a key figure of the No Wave movement and one of the most influential performers of the 1980s. She has been part of the bands 8 Eyed Spy, Devil Dogs, 13:13 and Big Sexy Noise. Lunch’s solo career has featured collaborations with musicians such as Kim Gordon, Thurston Moore, Nick Cave, Oxbow and Robert Quine, among others. Lunch has written, directed and acted in a number of underground films, both independently and in collaboration with filmmaker and photographer Richard Kern. She has recorded and performed as a spoken word artist, working with artists such as Henry Rollins and Exene Cervenka. Throughout her career she has authored both traditional books and comics including AS-FIX-E-8 and Will Work for Drugs. In 2007 Lunch released Paradoxia, a loose autobiographical work cataloguing her early life in New York. Lunch presented the one woman show “The Uncensored Lydia Lunch: A Discourse on Sex, Money, Politics, and the American Way of Life” in 1986 and the video dramatization “The Gun is Loaded” in 1989 at The Kitchen. 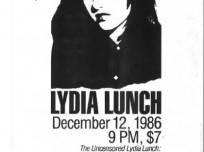