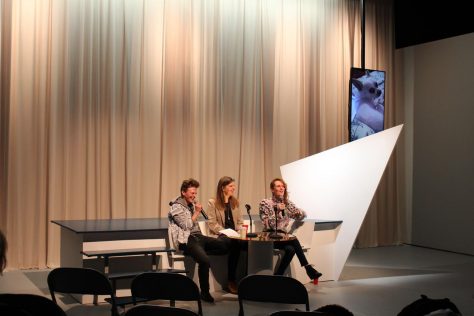 Here I Go, pt. 2 of You functioned as a two-week open work period and colloquy led by Tina Satter, the artistic director of Brooklyn-based performance ensemble Half Straddle. The project stemmed from the conviction of its participants that in the contemporary political climate, it is imperative to reclaim spaces, ideas, and paradigms for female-identified, queer, and other informed persons who embody a feminist ethos. In addition to an installation designed by Satter and Parker Lutz with works by John Davis and Heidi Hahn, numerous artists, writers, and thinkers gathered together at The Kitchen to give lectures, play music, and share ideas about feminism, performance, and contemporary art and culture. Evening lectures were accompanied by musical performances by Half Straddle members as well as invited bands made up of local teens. Additionally, The Kitchen’s theater, when not given over to lectures or musical performances, was utilized by Half Straddle as a public rehearsal space. This series was organized as part of “The Kitchen L.A.B.: POSITION” by Lumi Tan.

View images for this event (10)