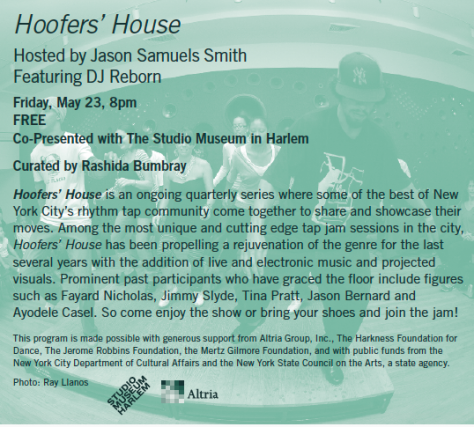 Hoofers’ House was an ongoing quarterly series where New York City’s rhythm tap community came together to share their work. On May 23, 2008, The Kitchen and The Studio Museum in Harlem presented an installation of the series, curated by Rashida Bumbray. The event paid homage to the early 20th century “Hoofer’s Club” in Harlem’s Comedy Club on 131 Street, a space where steps were created and listened to. Choreographer and director Jason Samuel Smith hosted the event, and DJ Reborn was featured. Film and video artist Rashaad Newsome provided visuals for the event and tap dancers of all ages were invited to join for a jam session on the floor.