Skip Blumberg is an American video artist who helped pioneer the medium in the 1960s and ‘70s. He was among the early camcorder reporters and independent video artists, with his work encompassing installation, experimental film, cultural documentaries, and performance videos. Blumberg has documented the likes of Nam June Paik and Laurie Anderson, and his work in Pick Up Your Feet: The Double Dutch Show (1981) is heralded as an exemplar of documentary film. Blumberg was also a member of Videofreex, a do-it-yourself video collective that used the Sony Portapak—the first portable videotape recorder—to document community-minded and countercultural video projects, including profiles of Black Panther activist, Fred Hampton. He was involved in a 1979 videotape screening series at The Kitchen that was hosted by the Foundation for Independent Video and Filmmakers (FIVF). 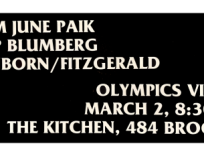