Steve Koplan is a video artist who was prominent in the 1970s and ‘80s as the medium was increasingly used by artists to explore new means of communication and transmission of ideas in a media-saturated age. His video work was shown at various group exhibitions at MoMA (e.g., Animal Magnetism, 1982) and Long Beach Museum of Art. In 1979, Koplan screened his video "Balls" at The Kitchen as part of Videotapes from FIVF series in 1979. 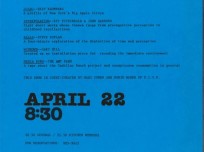