Kembra Pfahler (b. Hermosa Beach, CA 1961) is a musician, filmmaker and performer best known as the lead singer of shock rock band, The Voluptuous Horror of Karen Black. Pfahler’s films were part of the No Wave’s Cinema of Transgression in the 1980’s. She collaborated with then husband, Somoa Moriki for Pussycatbladderwaste, a performance included in The Kitchen’s Carnival of Sleaze. 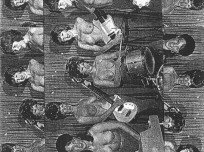