Geraldine Wurzburg is an American filmmaker, educator, and social media strategist based in Washington, DC. Wurzburg is best known for her documentary film work that has delved into a variety of subjects including the interior lives of people with disability, women who have undergone abortion, and the first women coal miners in the U.S. Her practice, by and large, uses media to encourage shifts in perception around non-traditional realities. Wurzburg received the Academy Award in 1993 for her documentary short Educating Peter that followed a special needs student with Down’s syndrome matriculating through the third-grade. In 1979 Wurzburg showed A Reunion, a work-in-progress film as part of the Videotapes from Foundation for Independent Video and Filmmakers (FIVF) series at The Kitchen. For more information please visit: http://www.wretchesandjabberers.org/bios/gerardine-wurzburg/ Note: There may have been a clerical spelling error with Wurzburg’s first name as originally published in material disseminated around the 1979 screening; several other sources indicate Wurzburg’s first name is spelled Gerardine as opposed to Geraldine. 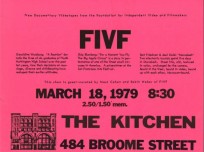