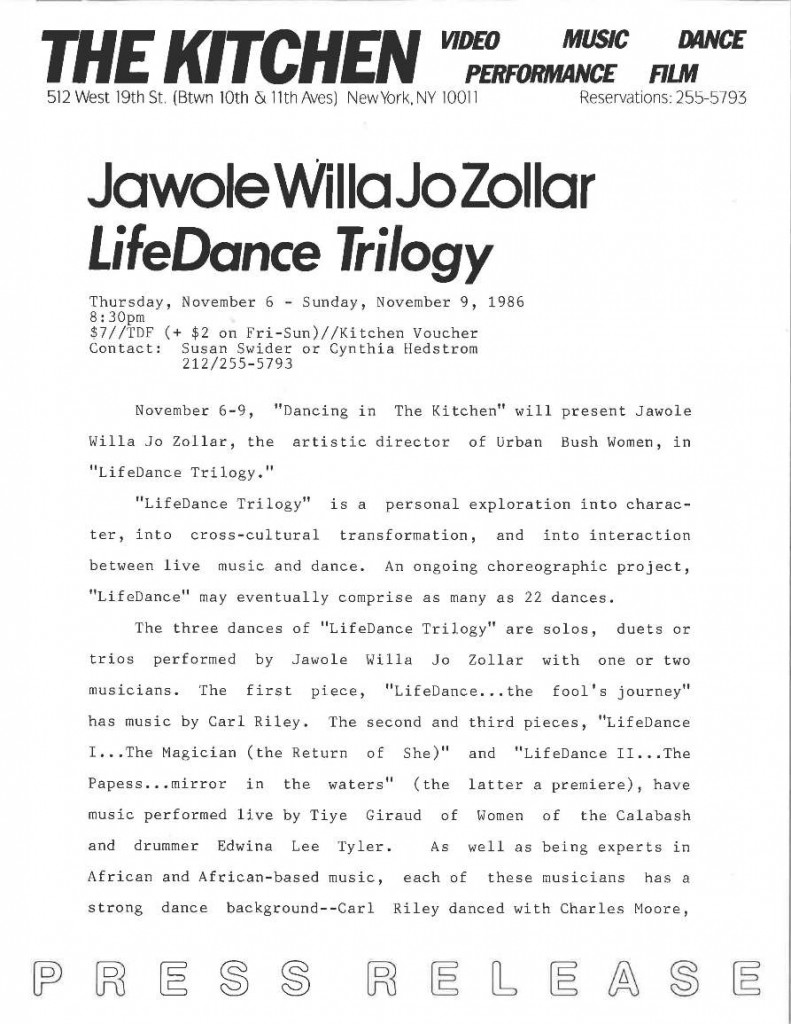 LifeDance Trilogy was a performance created by Jawole Willa Jo Zollar, artistic director of Urban Bush Women, that was presented at The Kitchen from November 6–9, 1986. As an ongoing choreographic project, the performance at the time consisted of three dances but was expected to later include more. The first dance, titled “LifeDance… the fool’s journey,” included music by Carl Riley. The second and third dances, titled “Life Dance I… The Magician (the Return of She)” and “Life Dance II… The Papess… mirror in the waters,” were set to music performed live by Tiye Giraud and Edwina Lee Tyler. All three musicians were not only experts in African and African-based music, but also experienced dancers. Likewise, Zollar’s choreographic style was highly rhythmic and musical, drawing upon African and Caribbean folkloric elements. In the work, Zollar explored personal character, cross-cultural transformation, and the interaction between live music and dance. Invoking an ancestral spirituality, the three performers chanted field hollers associated with Southern Black slaves, shouted verses from the Bible, and imitated the journey of life.

The New York Times found that in the show, “Stages of life and facets of character are brought vividly alive, then woven together into a provocative whole.” The Village Voice found Zollar’s combination of narrative and performance to be similarly praiseworthy, writing that “In her powerful portraits, you can certainly see a woman dancing, but you never see dance steps. How refreshing.” In 1992, Zollar would continue the project with LifeDance III.