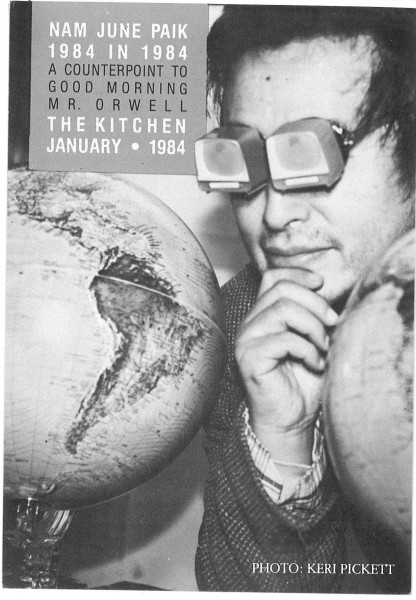 1984 in 1984 was a video work that Nam June Paik devised as a counterpoint to his global broadcast event Good Morning Mr. Orwell. Originally a live television show that included computer graphics designed by Paik alongside streamed video footage, Good Morning Mr. Orwell featured performances by Laurie Anderson, Philip Glass, Allen Ginsberg, Merce Cunningham, Robert Rauschenberg, and many more, broadcasting from New York, Paris, Berlin, and Seoul to an audience of over twenty-five million viewers. The event, which occurred on New Year’s Day of 1984, discredited the George Orwell novel 1984’s pejorative view of technology by portraying television and mass media as agents of art and the avant-garde rather than as tools of totalitarianism.

The Kitchen presentation of 1984 in 1984 included a two-channel installation of the New York and Paris tapes from Good Morning Mr. Orwell, and was on view from January 5–28, 1984. In the early weeks of the showing, Paik gave several lectures and performances to accompany the work.