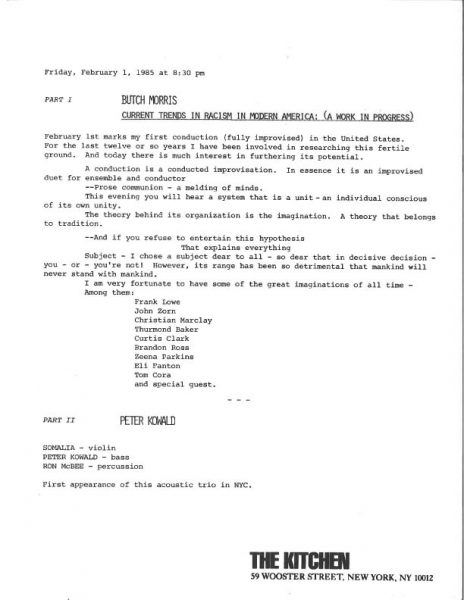 Marking the culmination of twelve years of research, Current Trends in Racism in America: (A Work in Progress) marked the US premiere of the musician, composer, and conductor Butch Morris’s method of “Conduction®,” a form of “conducted improvisation” for music ensembles that Morris spent most of his career developing. Among the ten musicians who performed were Frank Lowe on tenor sax, Christian Marclay on turntables, Zeena Parkins on harp, and John Zorn on saxophone. There was no written music to accompany the performance; rather, Morris aimed to create a unified sound by guiding musicians with a series of gestures and signals. The title theme was chosen by Morris given its relevance to all members of society. The performance was recorded and released the following year as an album by Sounds Aspects Records. The same evening concert included the New York City debut of a trio of improvising musicians, led by double bassist Peter Kowald, and including Somalia on violin and Ron McBee playing percussion.