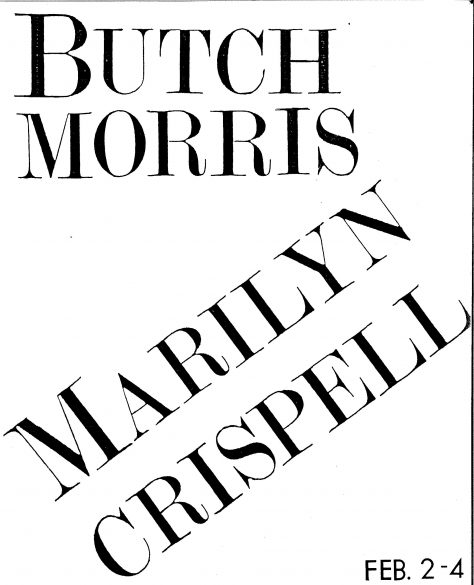 On the occasion of its tenth anniversary, Roulette, a venue presenting new music as part of the downtown scene in New York City, commissioned the composer and jazz pianist Marilyn Crispell, composer, conductor, and cornetist Butch Morris, and the multi-instrumentalist and composer Fred Frith to produce new work. On February 2, 1989, both Morris and Crispell premiered this new work at The Kitchen, an event that marked the first collaboration between The Kitchen and Roulette. The evening opened with Morris’s new composition, Spring Quartet, which incorporated the methods of structured improvisation that Morris had been developing. The quartet, consisting of musicians with both jazz and classical music expertise, comprised Vince Chancey on french horn, Janet Grice on bassoon, Marion Brandis on the flute, and Jason Hwang on violin. Crispell’s new work For Trio incorporated texts and poetry written by the composer and was performed by Crispell on piano, Mark Dresser on bass, and Gerry Hemmingway on percussion. This was their first time playing as a trio, having performed together previously as three-quarters of the Anthony Braxton Quartet. This performance of For Trio was recorded and released as an album in 1991 titled The Kitchen Concert.