Peter Kowald was a German double bassist and tubist associated with free jazz. While Kowald maintained a base in Wuppertal, Germany he travelled extensively throughout his life and collaborated with a variety of European and American free jazz players throughout his career including the renowned German saxophonist Peter Brötzmann, the Swiss pianist Irène Schweizer and William Parker, the composer and multi-instrumentalist from New York City, among many others. Kowald recorded several solo double bass albums as well as duets with fellow improvising double bass players including with Barre Phillips in 1979 and Joëlle Léandre in 1993. Kowald was also a member of the free jazz ensemble the Globe Unity Orchestra, led by the composer Alexander von Schlippenbach, and he played with the improvising ensemble the London Jazz Composers Orchestra until 1985. He frequently collaborated with artists from other disciplines including several poets, visual artists and dancers. Along with William and Patricia Parker, Kowald set up the Sound Unity Festival of improvised music which took place in New York City in 1984 and 1988. Kowald performed at The Kitchen in 1985 alongside violinist Somalia and percussionist Ron McBee as one half of a double bill that also saw the United States premiere of the composer Butch Morris’ “conducted improvisation” method for improvising ensembles. 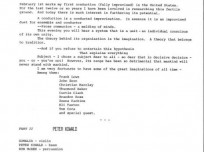