Whiz Kid (aka Harold McGuire) was a grandmixer and producer remembered for his extensive DJing and work with the legendary Tommy Boy label. He performed often at New York clubs such as The Roxy and Disco Fever, and was invited two years in a row to demonstrate the art of mixing to international DJs at the annual New Music Seminars. In 1982, Whiz Kid performed at The Kitchen's two-night 'His Master's Voice' event. He passed away in the late 1980's. 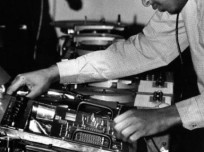