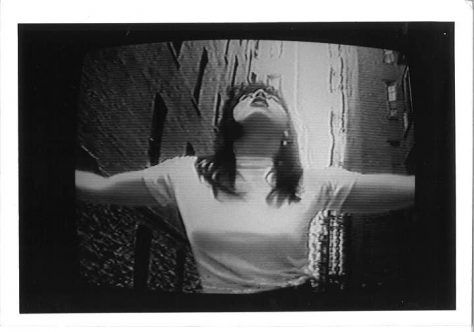 The Gun Is Loaded is a video written and performed by Lydia Lunch that was based on a solo performance she gave at the Performing Garage in which she lambasted the male-dominated power structures and political systems in the US. Directed by Merrill Aldighieri and Joe Tripician, footage of contrasting neighborhoods of New York City along with deliberately unsettling music by the musician and industrial artist J. G. Thirlwell formed the backdrop for Lunch’s scathing address  This screening of The Gun Is Loaded at The Kitchen in April 1990 was the video’s world premiere. It was screened alongside Borders (1989), a film with a similar socially critical bent written and narrated by humorist, philosopher, and writer Robert Anton Wilson. Starring Wilson himself and a young Steve Buscemi, the film is in a documentary-style and incorporates fictional aspects with computer graphics. The film is a continuation of Wilson’s life-long philosophical inquiry of human subjectivity and objectivity. Using the sociopolitical climate of his time as a backdrop, Wilson blurs the “borders” that we tend to create between reality and fiction.