With a vast body of work spanning genres and disciplines, Dan Graham has sought to engage the viewer in an evolving experience and analysis of boundaries and perceptions. Often seen as challenging spatial and social arrangements, Graham's work and influence as an artist directly creates or infiltrates public and private space, calling into question the influence of the spectator and atmosphere. Through use of video installation, architecture, performance, and the written word Graham's dispersive impact on creative communities and spaces can be found in the reverberations of many multimedia artists today. Graham began showing his work in New York in the 1960s. In 1964 he opened the John Daniels Gallery with several friends and exhibited works by artists such as Robert Smithson and Sol Le Witt. Graham later went on to develop his prolific photographic and textual provocation Homes for America. Originally shown as a slide projection, Graham soon decided to reduce the gap between art, its impact, and the viewer by bypassing gallery shows and inserting his work directly into Arts Magazine. This move towards perverting accessibility and means of popular production endured throughout Grahams career as he continued to structure pieces of critical social thought and confrontation. Further pressing into questions of perception and reflection, Graham’s pieces often enact cycles of feedback with the gleaming translucence of the physical materials he works with. His 1975 piece “Performer/Audience/Mirror” marked modes of objective and subjective gaze on the self, the audience with his self-placement in between the audience and a wall length mirror. Continuing to feature the activity of viewing in his performance, video, and location based work, Graham developed collections of two-way mirror structures such as his 1976 piece Public Space/Two Audiences and his 1989 work Two Way Mirror With Hedge Labyrinth. In addition Graham engaged with the social phenomena of public architecture, suburbia, and punk culture in video work such as the 1983 film Rock My Religion, which followed the emergence of rock music from religious revivals to counter-culture ideologies. Prior to this, Graham developed film and film/performance pieces such as Videotape, which was performed at The Kitchen in 1975, that continued to explore through minimal means what it means to watch and infiltrate real time with the conundrum of filming, playback, and documentation. 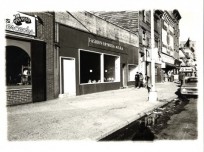 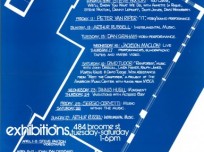