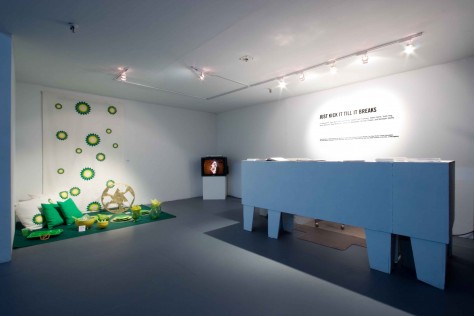 This group exhibition attempted to respond to a historical time characterized by widespread conservatism, moderated civic activism, and dominating consumerist culture. Through allegories and indirect approaches, the artworks included in JUST KICK IT TILL IT BREAKS investigated and questioned the vision of politics. Drawing elements and language forms from advertising, media culture, and interior design, this show identified the aspects of the act of protesting that are complicit to capitalism, as well as challenged the role and function of outlaw culture and underground movements. JUST KICK IT TILL IT BREAKS was curated by Debra Singer and Matthew Lyons.