Alex Hubbard is a New York based artists who primarily works in painting and video. Throughout his career painting and video works are inextricably linked. Many of his videos record the manipulation of objects against a flat plane, challenging the idea that frames necessarily only allow for two dimensional work and lending his video works a sculptural quality. In his paintings, he often challenges the hierarchy of painting over other mediums. His paintings are often layered with stencils and screen prints, in addition to having a technological aesthetic. Hubbard’s work was first shown at The Kitchen in 2009 as part of the group exhibition Besides, With, Against, and Yet: Abstraction and the Ready-Made Gesture, and he later had a solo exhibition in 2010 called Death Never Sleeps. For more information, please visit: http://www.simonleegallery.com/artists/alex_hubbard/ 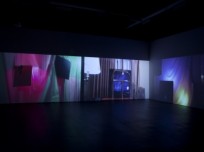