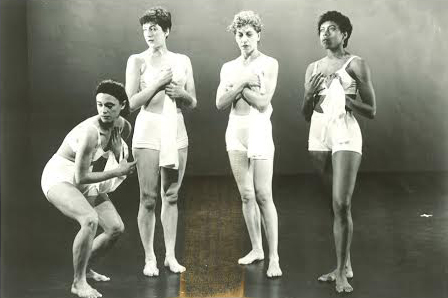 After workshopping a short piece, Albino Olympia, in March 1991 as part of the Working in The Kitchen series, choreographer JoAnn Fregalette Jansen presented a full program of work at The Kitchen from April 9–April 12, 1992. The program was anchored by the piece A Short History of Mirrors, which explored the ways children slowly come to distinguish the “self” from the “other" in their journey toward adulthood. Throughout the performance, dancers scrambled on the floor, pointed to imaginary objects, stood on their heads, and climbed a ladder that went nowhere. Underscoring the importance of seemingly meaningless “play” to child development, these actions were meant to mimic the movements of toddlers who are only just discovering who they are—and only just discovering how to interact with objects and other people. One dancer, John Flunk, was dressed in glowing lightbulbs, reminding the audience that small children often develop obsessive and idiosyncratic relationships to everyday objects.

The program also included two shorter works, The Extravagance of Laughter and Albino Olympia. Like A Short History of Mirrors, these brief pieces oscillated between fast and slow tempos, sometimes building to an energy so great that, as critic Jack Anderson noted in his review of the program for The York Times, it felt like a “choreographic storm wind.”