JoAnn Fregalette Jansen is a choreographer, director, acting coach, and producer with a multitude of credits in film, television, commercials, and music videos. Previously, Jansen studied choreography with Bessie Schönberg; modern technique with Merce Cunningham, Viola Farber, Dan Wagoner, and others; and ballet with Maggie Black. She holds a BFA in Literature/Dance from Ohio University, an MFA in Kinesiology and Physiology from Smith College, and studied Psychology/Movement for Children with Special Needs at University of Massachusetts. Jansen served as The Kitchen's Dance Curator from 1992-1994. She first presented work at The Kitchen while participating in the winter/spring 1991 season of the dance workshop series Working in The Kitchen. With her company J. Fregalette Jansen Dance, she staged three works at The Kitchen in 1992: A Short History of Mirrors, The Extravagance of Laughter, and Albino Olympia. 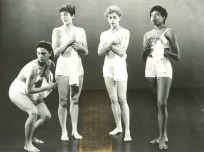