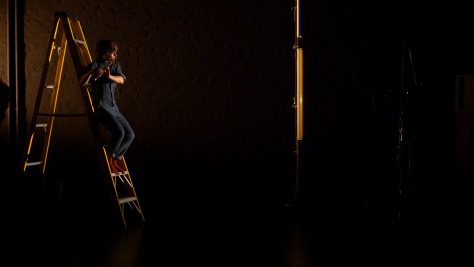 In 2016, Claire Chase debuted "Density 2036: part-iv", as part of her 22 years long, ongoing series "Density 2036," at The Kitchen. With "Density 2036: part-iv" Chase wanted to explore the flute beyond the solo, seven pieces were performed, five of which premiered for the first time. The first piece of the evening was Edgard Varèse's flue solo "Density 21.5,"(1936) played by Chase, with a movement score by  Julie Beauvais. The second piece was "The Stimulus of Loss" (2016) written by Suzanne Farrin and performed by Chase on flute, and Ferrin on the ondes Martenot. The third piece was "Bertha's Liar" (2016) written by Tyshawn Sorey, with Chase on the contrabass flute, and Sorey on the drums. The fourth piece was "Flute Goals" (2016) written by Vijay Iyer, and performed by Chase featuring sound design by Levy Lorenzo. The next piece was Suzanna Ferrin's rendition of "Destiny 21.5,"(1936) on the ondes Martenot. The sixth piece of the evening was "Gama XV: Piece for Two Speaker Dresses"(2016)  composed by Pauchi Sasaki,  and performed by Chase on bass flute, vocals and speakers dress and Sasaki on violin, electronics, vocals and speaker dress. The final piece of the evening was "Another Woman of Another  Kind: seven stores for flute and eight voices on texts by Paul Griffiths" (2016) written by Richard Beaudoin, and performed by Chase on flute accompanied by voice ensemble Roomful of Teeth with composer Brad Wells.

In 2014, in homage to the flute solo "Density 21.5," by Edgard Varèse, world-renowned flutist, Claire Chase started a 22-year project, "Density 2036," whereby she commissions a new piece of music flute music until the year 2036, for 100 year anniversary of the seminal work.