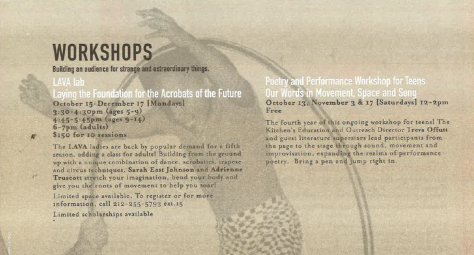 In fall 2001 as part of The Kitchen’s Open Kitchen series of educational programs, Education and Outreach Director Treva Offutt hosted the fourth season of the Poetry and Performance Workshop for Teens called Our Words in Movement, Space and Song. Over the course of three Saturday sessions between October 13 and November 17, Offutt and guest writers led participants through the process of putting words onto paper, then taking those words back into the body and putting them out again through performance. Teens were invited to bring a poem, story, song, or a piece of movement or music they had been working on, and The Kitchen provided technical support for the resulting productions, including the use of microphones and spotlights.