Yoshi Wada is a Japanese composer and sound installation artist associated with the downtown New York, experimental arts scene of the last fifty years. Born in 1943, Wada studied sculpture at the Kyoto University of Fine Arts, and then moved to New York in the late 1960s. There he studied music composition with La Monte Young, North Indian singing with Pandit Pran Nath, and Scottish Bagpipe with James McIntosh. After working with many artists associated with the Fluxus group, Wada began building homemade musical instruments and writing compositions for them based on his personal research in resonance, timbre, and improvisation with the overtone series. He has performed at The Kitchen throughout his career, notably presenting Small Night Music in the Fog in 1976 and Lament for the Rise and Fall of the Elephantine Crocodile in 1980. 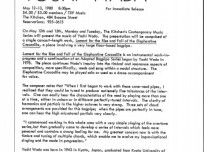