Larry Miller is an intermedia artist whose work has been presented extensively in global venues since his initial solo exhibition in New York in 1970. He was active in the development of multi-media and performance-based works in SoHo's earliest alternative spaces, and was associated with developing new configurations in the period that gained critical currency in being described as "installation art". Miller participated in The Flux Concert at The Kitchen in 1979, as well as staged a number of solo performances. For more information, please see: http://www.onlyonelarrymiller.com/ 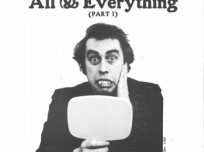