Sylvia Palacios Whitman is a Chilean-American artist who is primarily known for her performance art, dance, and choreography during the 1970s in New York. After graduating from Santiago’s School of Fine Arts she came to New York to pursue dance and theater, eventually joining the Trisha Brown Dance Company from 1973 to 1974. Palacios Whitman’s performances have often combined large scale props with minimalist dance movements, lending her work simple, yet bold visual drama. Palacios Whitman’s first performance, titled “Clear View” at The Kitchen was shown in November of 1976. After the early eighties, Palacios Whitman has been inactive in New York, but in 2013 she performed at the Whitney’s Rituals of Rented Island: Object Theater, Loft Performance , and the New Psychodrama – Manhattan exhibition, which coincided with her first show at Broadway 1602 with performances not seen since the 1970s. For more information, please visit: http://broadway1602.com/artist/sylvia-palacios-whitman/ 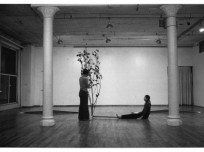