Sarah Michelson is a dancer and choreographer. Michelson is known for her innovative works that synthesize movement, venue, sound, and the natural environment. She has premiered several commissioned works at The Kitchen including Grivdon at the Grivdon Concrete (2002), Shadowmann (2003), Dover Beach (2009) and Devotion (2011). Michelson went on to win the prestigious Bucksbaum Award when Devotion Study #1 was included in the 2012 Whitney Biennial. Michelson served as the Associate Curator of Performance at The Kitchen from 2003-2005. Since then, Michelson has been a guest curator at The Kitchen and serves on The Kitchen’s Advisory Board. Since 2010, Michelson has also been a frequent mentor and leader of The Kitchen's long-running Dance and Process series including most recently years 2013 and 2014. 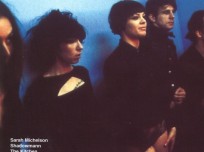