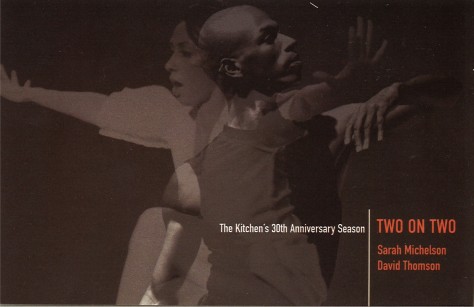 On April 19 and 20, 2001, The Kitchen presented the third installment of its Two on Two [2/2] series, a rare opportunity for visitors to see works-in-progress by contemporary choreographers and dancers after two weeks of rehearsal and feedback. This installment featured two veterans of The Kitchen’s Dance in Progress series, Sarah Michelson and David Thomson. Michelson performed her first solo performance, Grivdon, which she referred to as “a concert hall dance for a tiny tiny blade of grass.” Thomson presented Forest, “a series of solos-in-process following an ongoing permutation of materials.”