DD Dorvillier is a dancer, choreographer, and teacher. Since 1989 she has created and produced her works in New York City, and more recently on the international circuit. Dorvillier has collaborated frequently with dancer/choreographers Jennifer Monson, Elizabeth Ward, and Heather Kravas, composer Zeena Parkins, and lighting designer Thomas Dunn. In 2000 she initiated human future dance corps, a dance company supporting her individual work as well as collaborations with director/playwright, Peter Jacobs. In 2001, at The Kitchen, with human future dance corps, Dorvillier presented "Wind (the Eternal Return of the Same)." In 2007, Dorvillier presented "Nottthing is Importanttt." 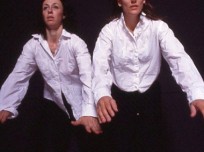