Nicole Eisenman is a visual artist known for her paintings, sculptures, and installations that consider sexuality, comedy and caricature. She also worked with A.L. Steiner to present Ridykeulous. She has been the recipient of a number of awards including the Anonymous Was a Woman Award (2014), the 2013 Carnegie Prize, the John Simon Guggenheim Grant (1996), the Joan Mitchell Foundation Grant (1995), the Louis Tiffany Grant (1995) and the Penny McCall Foundation Grant (1995). Eisenman lives and works in Brooklyn. 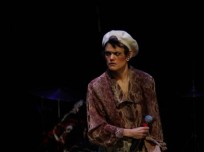