Nan Goldin is an American photographer based in Paris and New York City. Goldin is known for her intimate portraits of those closest to her, which often take the form of snapshots and depict individuals and activities typically deemed transgressive or marginalized by mainstream society. Goldin began taking photographs as a teenager growing up in Boston and she had her first exhibition in 1973, which presented a series of photographs she had taken while living with the drag queen community in downtown Boston at the age of 18. Upon moving to New York City in 1979 Goldin immersed herself within the post-punk new wave music scene, the hard-drug taking subcultures in the Bowery neighborhood and the LGBTQ community at a time when the AIDS crisis was escalating in New York City, all of which she captured in her photographs from the time. The Ballad of Sexual Dependency (1980-1989), perhaps her most well-known work, drew from this body of work and was exhibited as a slideshow with accompanying music. While retaining a focus on the people and personal environments around her Goldin’s more recent work has also included commercial fashion photography, collaborative book projects and the inclusion of the moving image in presentations of her work. Goldin first showed slides at The Kitchen in 1980 as part of the evening Dubbed in Glamour curated by Edit DeAk. She returned in 1994 for a solo presentation of three series’ of slides of work in progress that had never before been seen in the United States. For more information please see: http://www.matthewmarks.com/new-york/artists/nan-goldin/biography/ 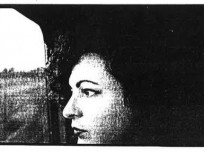