Robert Anton Wilson was best known as an American novelist, although he also did extensive work as a playwright, poet, and philosopher. After finishing high school in New York, Wilson went onto enroll in several undergraduate programs studying electrical engineering, mathematics, and English, and then much later in his career earning his B.A., M.A. and Ph.D. in psychology from Paideia University. He later worked as a freelance journalist and advertising copywriter for various publications and went on to write 35 books, the most famous of which is his 1975 cult classic series The Illuminatus! Trilogy. He described himself as an agnostic mystic and claimed that his work aimed at challenging the idea of an objective reality. His philosophy and politics were notably present in his work, and he often combined elements of non-fiction and fiction to articulate his ideas. In 1989 The Kitchen showed a film written and directed by Wilson called Borders. For more information, please visit http://www.rawilson.com/home.html. 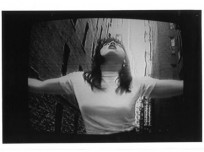