Jack Smith was an experimental cinematographer, actor, and photographer. He is perhaps best known for his 1963 film Flaming Creatures that was ultimately banned after being labeled as pornographic. Smith acted in his work, several films by Andy Warhol, and theatrical productions by Robert Wilson. Ron Vawter recreated Jack Smith's performance of "What's Underground About Marshmallows" in his seminal 1992 work Roy Cohn/Jack Smith. 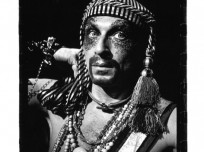