Cynthia Hedstrom moved to New York City in the 1970s to practice dance, and went on to collaborate with choreographers including Mary Overlie, Lucinda Childs, Steve Paxton, Wendy Perron, and Molissa Fenley among others. In 1974 as part of the group The Natural History of the American Dancer—including Carmen Beuchat, Barbara Dilley, Suzanne Harris, Rachel Lew, and Judy Padow—she performed at St. Mark’s Church-in-the-Bowery, whose appearances spurred the founding of Danspace Project later that year. Hedstrom went on to be Director of Danspace Project during the 1980s. In 1978 Hedstrom co-founded Movement Research with Wendell Beavers, Danny Lepkoff, Christian Svane, Richard Kerry, and Mary Overlie. Hedstrom is also a longtime performer in The Wooster Group, and now also acts as their producer. In 1979, Hedstrom performed with Augustin Dupuy in “One, Two…” at the Kitchen. 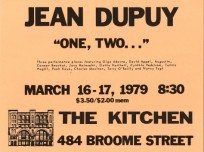