Amina Claudine Myers is a pianist, organist, vocalist, composer and arranger, and a member of the AACM since its founding in 1965. She is known for her works involving choirs, voice and instrumental ensembles and performances. She focused on vocal composition and arrangement, organizing her first choir in 1975. After relocating to New York in 1976, she intensified her compositional work and performing, even expanding to Off-Broadway. She pursues ongoing collaborations with Sola Lui, choreographer Diane McIntyre, poet Ntozake Shange and writer OyamO, and her past collaborations include Archie Shepp, Charlie Haden’s Liberation Orchestra, James Blood Ulmer, Gene Ammons, Sonny Stitt, Muhal Richard Abrams, Lester Bowie and Bill Laswell. 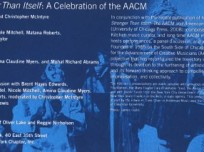