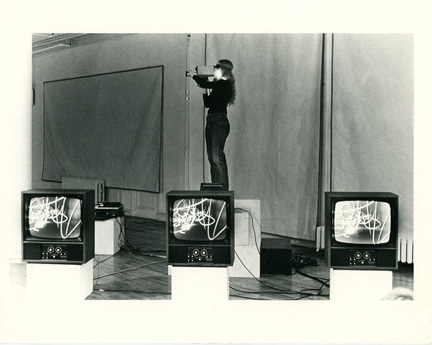 Air Writing/Video (1973 – 75) was a three-channel continuous videotape installation, which showed the results of Lucier’s use of a portable camera to write in the air using pauses, selective focus and editing for punctuation. On October 26th, Lucier conducted Fire Writing/Video, a live performance in which Lucier moved her portable camera around the room allowing lights that had been placed throughout the gallery to continuously burn the vidicon tube until it turned black. The text generated through her movements was recorded by the camera and transmitted on monitors facing the audience, acting like both an indecipherable script of the performance and indexical mark. Both works were in keeping with Lucier’s guiding interest in how landscape and memory inscribe themselves on the material apparatus of the camera.