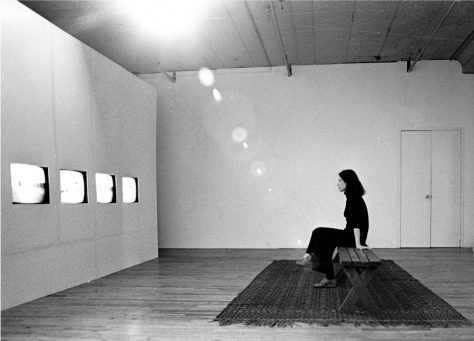 On March 15–29, 1975, Beryl Korot Video took place at The Kitchen. Korot debuted Dachau 1974, a four-monitor video installation. The monitors were paired off, the first and third playing matching sequences as the second and fourth respectively. Within the pairings, the sequences diverge in the timing, then sync at certain points. In The Kitchen’s presentation, there was a simple bench directly in front of the monitors with a schematic diagram on the wall behind describing the sequencing of the images.

The installation “recreates the impact” of the former concentration camp in Dachau, West Germany. The repetition of selected imagery and the asynchrony of the footage reflects the monotonous, yet horrific memories of Dachau. As a four-channel installation, it is a direct refutation of the spectacle of Dachau as afforded by the traditionally single-channel medium of television, demanding the spectator to view the piece as a holistic experience embedded in time and divorced from the experience of watching television.