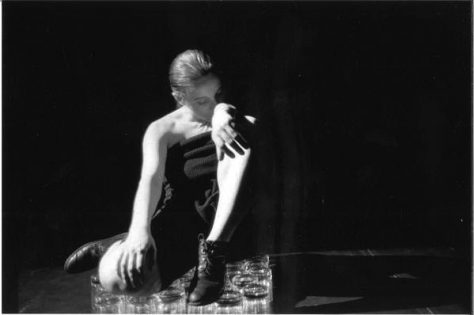 In her first full evening program at The Kitchen, Olga Mesa presented Solos, which consisted of four extended solo works. The titles of the individual works, in English, Spanish, and French, indicated the three countries she had personal connections with. All four pieces were originally sketches for her longer performances, Lugares Intermedios (1992) and Des/Apariçoes (1994). The lighting design was done by Cora and music included works by Richard Strauss, Roth Summer, Fernando Lopez-Hermoso, Portuguese Fado, and J.S. Bach.