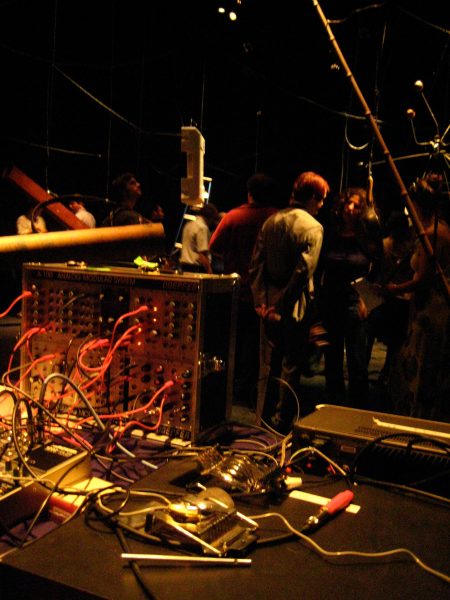 David Tudor’s Rainforest IV is an electroacoustic environment originally conceived in 1973 at the New Music in New Hampshire festival, which has been subsequently realized by the group Composers Inside Electronics (CIE) for over thirty years, and which was notably performed at The Kitchen in 1975. In conjunction with the 2007 exhibition Between Thought and Sound: Graphic Notation in Contemporary Music, CIE realized the piece once again in The Kitchen’s theater space. In Rainforest IV, the composers each send sound through a set of sculptural objects, which become speakers as they resonate and produce more sound. Contact microphones affixed to the objects pick up these vibrations and route back to the electronic sound source to produce a feedback loop. The audience is free and encouraged to walk around the environment, interact with the objects, and discuss with each other and the musicians. This iteration of the piece was performed by CIE members John Driscoll, Phil Edelstein, and Matt Rogalsky, with special guests Ian Driscoll and Stephen Vitiello.