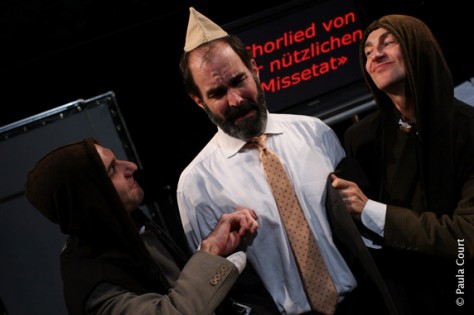 David Gordon’s Uncivil Wars was a dance-theater work performed in The Kitchen's black-box theater. The piece was developed from material borrowed from Bertolt Brecht’s treatises on playwriting and from his play The Roundheads and The Pointheads, as translated by Michael Feingold, as well as from Hanns Eisler’s thoughts on composing for the theater. The work also explored ideas about inspiration, collaboration, and the implications of readdressing historical works in the changed context of our present moment. The show featured eight performers (including Estelle Parsons and Valda Setterfield) playing multiple roles, as well as lighting by Jennifer Tipton and music direction by Gina Leishman. The show was curated by Dean Moss.