David Gordon is an American dancer, choreographer, writer, and theatrical director prominent in the world of postmodern dance and performance. Based in New York City, Gordon was one of the founding artists of Judson Dance Theater and was a member of Grand Union among others before forming the first of his own performance companies in 1978. Gordon's more recent work employs pedestrian dance movement, frequent use of spoken dialogue, and a Brechtian rejection of illusion. David Gordon's dance-theater piece Uncivil Wars was presented at The Kitchen in 2007. 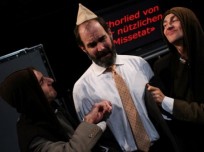