Richard Beaudoin is an American composer and architect of the microtiming technique. Microtiming is done by taking millisecond-level measurements of the rhythm in a recorded performance. Based on these proportions, a transcription of the sounds into music notation can then be made. In 2016 he was commissioned by Claire Chase to compose a piece for her project “Density 2036.” Beaudoin wrote ”Another Woman of Another Kind: seven stories for flute and eight voices on texts by Paul Griffiths” (2016), which was performed by Chase on flute and vocals by the ensemble Roomful of Teeth with composer Brad Wells, at The Kitchen as part of the the debut of “Density 2036: part iv.” For more information, please visit: http://www.richardbeaudoin.com/ 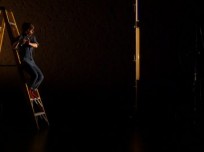