Claire Chase is an American flutist, based in Brooklyn. Considered the "young star of the modern flute," she was named a MacArthur Fellow in 2012 and awarded the Avery Fisher Prize in 2017. Chase is the founder of the International Contemporary Ensemble (ICE). ICE, founded in 2001, is a collective of artists that is committed to transforming the way musicians and communities create and experience around the world. Chase’s first appearance at The Kitchen was in 2013, for the release of her third album Density. Her setlist from the performance has evolved into “Density 2036: part i,” the prelude to “Density 2036.” Named in homage to “Density 21.5,” by Edgard Varèse's, “Density 2036” is a 22-year project, whereby Chase commissions a new piece of music for the flute each year, which is to premiere at The Kitchen. “Density 2036: part ii” debuted in 2014, and in 2015 she performed “Density 2036: parts i-iii.” Chase premiered “Density 2036: part iv” featuring collaborations with Pauchi Sasaki, Tyshawn Sorey, Julie Beauvais, and Roomful of Teeth with conductor Brad Wells, in 2016. For more information, please visit: http://www.clairechase.net/ 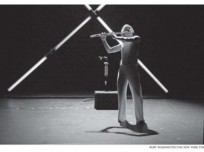