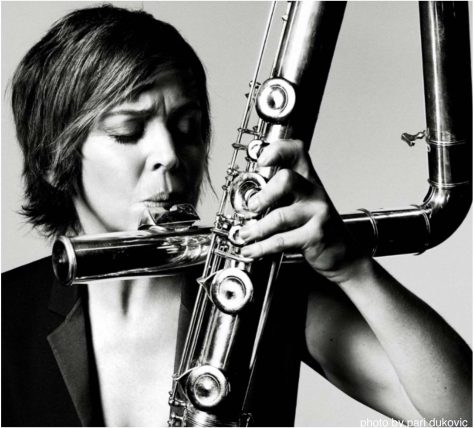 In 2014, in homage to the flute solo "Density 21.5," by Edgard Varèse, world-renowned flutist, Claire Chase started a 22-year project, "Density 2036," whereby she commissions a new piece of music flute music until the year 2036, for 100 year anniversary of the seminal work. Every three years of the cycle, Chase performs a retrospective of the works produced.

2015 was one such cyclical year. For three successive evenings at The Kitchen, Chase performed Density 2036: part-i (the prelude) and Density2036: part-ii, as well as premiered five new works for Density2036: part-iii.  The works premiered by Chase were "Lila" (2015) by Dai Fujikura, which was written for Chase, as a solo concerto; "The Famous Box (2015) by Francesca Verunelli, which was inspired by 1898 French cinema; "Limn" (2015) by Nathan Davis written  for Chase for bass and contrabass flute; and "The Silence"(2015) written by Jason Eckardt, as a meditation on those who are muted. The final piece debuted was "Intensity 20.15." For this piece, Chase was accompanied by Lorenzo Levy, who manned the Expanded Instrument System, which is a machine that played back prerecorded material by Chase,  as well as small percussion instruments. "Intensity 20.15" written by Pauline Oliveros, as a tribute to Chase's grandmother, Grace Chase.