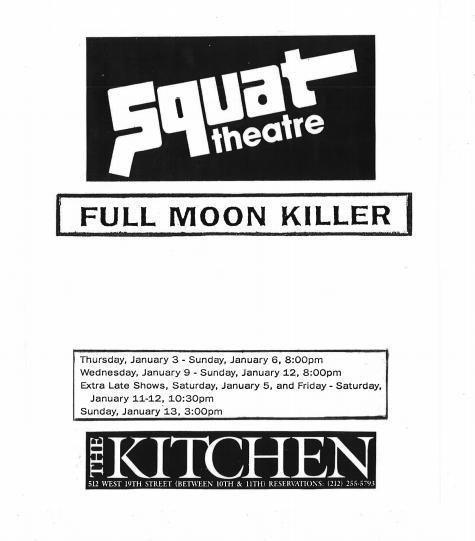 Full Moon Killer was a fifty-minute theatrical performance presented by Squat Theatre at The Kitchen, premiering on January 3, 1991, and running through January 13, 1991. Full Moon Killer was the third and final part of the new Squat Theatre play Killing Time. The work used a combination of guerrilla theatre and nightmarish imagery to tell a story of a serial killer terrorizing New York City. The performance was presented in two parts: the first depicts the murder of several people by a figure wearing a moon mask, and the second features a jailhouse monologue.


Full Moon Killer was written and directed by Stephan Balint, with stage design by Eva Buchmuller and Jan Gontarczyk, lighting by Michael Chybowski, music by Roy Nathanson, and sound design by Connie Kieltyka.