Squat Theatre is a collective of artists, writers, and musicians, founded in Budapest in the 1960s. Members of Squat Theatre were exiled from Hungary in the 1970s due to their extremism, and in 1978 the group moved to a location on West 23rd street, where they became known for experimental theater that featured their storefront window view of the city as a backdrop. The use of urbanity both thematically and aesthetically can also be seen in Squat Theatre’s many performances at the Kitchen: productions such as “Dreamland Burns” (1986) and “Full Moon Killer” (1991) grittily depict the overlap of art, violence, and hallucination in urban settings. For more information please visit http://squattheatre.com/ 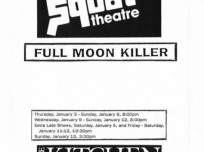