The Deed were a five-piece group led by the guitarist Andre Anthony who were based in New York and played together for a number of years during the 1980s before disbanding. The group also included the composer Menville Nolte on guitar and keyboards, the saxophonist Kevin Michaels, Jeff Blount on bass and Rocky Bryant on drums. Anthony, originally from Trinidad, wrote most of the music for the band, which often fused Caribbean rhythms with the sounds of punk and funk and incorporated the qualities of polytonality and angularity that were being advanced by other musicians at the vanguard of the jazz and improvising music scene at the time. The Deed initially played club and college gigs in New Jersey before performing at venues downtown in Manhattan in the mid-1980s. Around this time Anthony became a member of the Black Rock Coalition, an artist collective and non-profit organization dedicated to promoting the work and creative freedom of black musicians, which led to a number of BRC-supported shows for the band. The Deed played at The Kitchen in 1987 as the intermission act for a performance by the Butch Morris Trio. 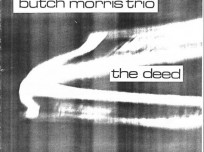