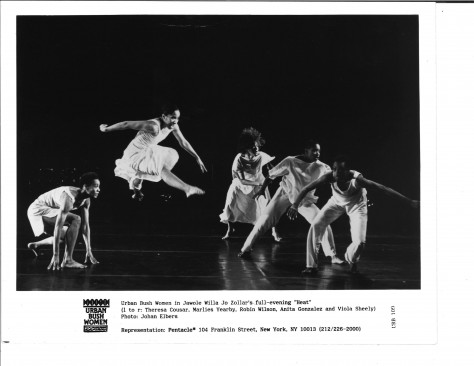 Heat was a multidisciplinary collaboration between the modern dance ensemble Urban Bush Women, the performance poetry group Thought Music, and the Dirty Tones Band, staged at The Kitchen in late September and early October of 1988. It was choreographed by Jawole Willa Jo Zollar, co-directed by Zollar and Laurie Carlos, composed by Craig Harris, and written by the members of Thought Music, which included Carlos alongside Jessica Hagedorn and Robbie McCauley. Leni Schwendinger led visual concepts and lighting/projections design.

The work—consisting of two sections, “New Moon Fantasies” and “Shelter”—evoked the many images suggested by the word “heat,” from the developing sexuality of adolescent women, to the sultry lethargy of a hot inner-city night, to the anger of the displaced. Through these images, the piece explored themes of alienation, racism, loss, and survival, driven by Zollar’s rich combination of classical modern and Afro-Haitian dance traditions, as well as Harris’s eclectic style of jazz. Transcending the boundaries of discipline, each performer sang, acted, danced, and mimed, alternately lit with gold and red lights or silhouetted against the backcloth. In one gripping scene in “New Moon Fantasies,” Zollar concluded a solo by smashing a raw egg against her bare chest and brandishing a bloody dagger across her loins, leaving viewers shocked and mesmerized as the lights faded into black.